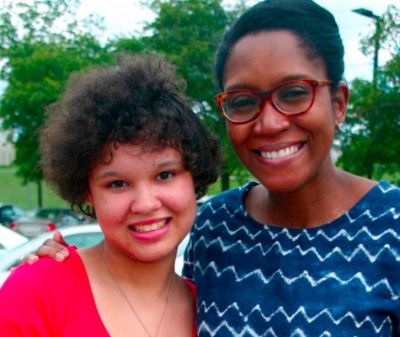 “I consider Brittani to be part of my family,” Little Sister Lori says with a smile. “She really is like a little sister to me,” Big Sister Brittani adds. When reflecting back to why Brittani got involved in Big Brothers Big Sisters, she says, “I started my new job at the Kelley School of Business at Indiana University and was new to Bloomington. I didn’t know a single person, so I decided to get involved in the community.”

Brittani turned to Bloomington’s volunteer network website to find something she was interested in doing. It seems that Big Brothers Big Sisters of South Central Indiana (BBBSSCI) immediately caught her eye. She sought out BBBSSCI to get involved and was matched with Little Sister Lori, who had been on the wait list participating in First Friends activities.
When the two were matched in October of 2012, they were filled with nerves and excitement. For their first outing they went to Jiffy Treat, a local ice cream shop. “Right away I realized that Lori is a very laid back person, so it seemed like a great fit.” For the following outings, they did things together that real sisters do; they got their nails done, went to the mall, attended movies, and got lunch together on Sundays.

“I would come home from spending time with Brittani and my brother would ask me a thousand questions because he was so jealous that I had a Big Sister!” Lori’s younger brother saw that she was having such a great time with Big Sister Brittani that he eventually entered the program and found the perfect Big Brother for him.

​The summer before Little Sister Lori entered high school, she was filled with the typical nerves any 14-year-old freshman has. “Will I make friends? Am I going to like it?” she thought. In order to help combat these nerves, Big Sister Brittani decided to help Lori get involved in something to help her meet new friends and become more confident. Brittani, the Director of Diversity Initiatives at the Kelley School of Business, decided to encourage Little Sister Lori to join a pre-college business club through the Kelley School. This club includes business case competitions, group work, and a lot of presenting.

“At first, I was so nervous to be presenting in front of other people,” Little Sister Lori explains. “I would sit with my group and be scared to contribute my ideas.” As Lori began attending more meetings, she was able to open up to everyone around her and become more comfortable contributing and sharing her ideas with her group. “I’ve learned tricks and tools to help me be more confident when I’m presenting. Sometimes, I look at Brittani when I’m presenting and act like we’re just having a conversation!” Little Sister Lori isn’t the only one who sees the difference the business club has made. “Lori has really been pushed out of her box,” Big Sister Brittani proudly says. “She really has matured.”

Over the last four years, Brittani has proven to be a consistent person for Little Sister Lori to lean on. Lori looks to Brittani when she is stressed with school, and Brittani has always been there to offer comfort and a helping hand. Big Sister Brittani seems to have one amazing goal throughout her relationship with Little Sister Lori.

“I want Lori to realize all of the options that she has after college,” Brittani says. From the beginning of their relationship, Brittani saw potential in Lori that hadn’t yet been realized. Throughout the four years, Big Sister Brittani has helped Little Sister Lori tap into that potential and gain confidence in herself. When asking them how they were going to spend the rest of their Sunday, Big Sister Brittani looked at Lori and said, “I think I’m in the mood for some Jiffy Treat, what about you?”